Posted by Vicki-kitchen on August 13, 2016
This recipe I first saw Nigella make on an episode of 'Kitchen' and thought at the time it looked so lovely and tasty and a brilliant way of making chicken go a long way. I honestly thought I would have to add some chicken stock cube or such like to the broth afterwards but no I think if you use good quality chicken it makes the most delicious tasty broth, If however when you make it you feel it lacks flavour feel free to add some chicken stock concentrate or a chicken stock cube. The chicken is soft and really juicy and the vegetables tender.

Nigella makes it with a whole chicken but it's very fiddly to remove the skin and fat from a whole raw chicken so I use a mixture of thighs and chicken breast and also this way if you only like chicken breast you can make it that way but I think chicken thighs have much more flavour.

I also love to reheat the next day with some broken pieces of spaghetti in so its like chicken noodle soup but be careful just make sure its reheated very well.

Oh and its called 'praised' chicken as Nigella says its a cross between braised and poached and was one of her Mothers favourite recipes so to make it seems like an act of devotion which I think sounds so lovely.

Spray some oil into the pot and heat then place the chicken in for a few minutes until slightly browned.

Drop in the vegetables and herbs around the chicken with a good grinding of salt and pepper then just cover with cold water and bring to the boil.

Place a lid on the pot and then simmer on a low heat for about  1 hr and then leave it sitting in the pot for another 30 minutes.

Remove the chicken portions from the pot and place on a board leave to cool for a little while  cut into chunks and put the meat back into the broth.

Taste for seasoning you might need more salt and pepper.

I served it (as Nigella did) over plain boiled rice. 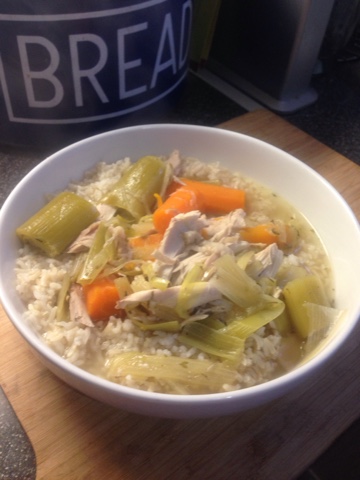