This recipe is from the Slimming World website and as it was St Davids Day this week thought would make a Welsh recipe although even though living in Wales for 24 years for have never heard of this!

I did enjoy it but think the cooking times should be longer so if I made it again which I will cook it for longer (I'll use the new cooking times in the recipe) I cut the onions and potatoes on a mandolin slicer as the slices really do need to be very thin.

I served it with my roast lamb Sunday dinner with some carrots , peas and brussels sprouts as well. There were lots of leftovers so will serve it later in the week maybe with some sausages or bacon.

2. Spray a pan with low calorie cooking spray, add the onions, a little salt and the rosemary. Cover and cook gently over a low heat for 20 minutes, stirring often. Discard the rosemary and set aside.

3. Spray the potato slices all over with low calorie cooking spray and season. Arrange half the potatoes in the bottom of an ovenproof frying pan, overlapping, in a circle. Add a layer of cabbage, a layer of onions and finally another layer of potatoes. Season again and spray with low calorie cooking spray. Place the pan on the hob over a medium heat for 5 minutes to colour the bottom, then transfer to the oven and bake for 1 hr 15 minutes.

4. Remove from the oven and leave to rest for 10 minutes. Place a plate on top of the frying pan and turn out the onion cake. Serve cut into generous slices. 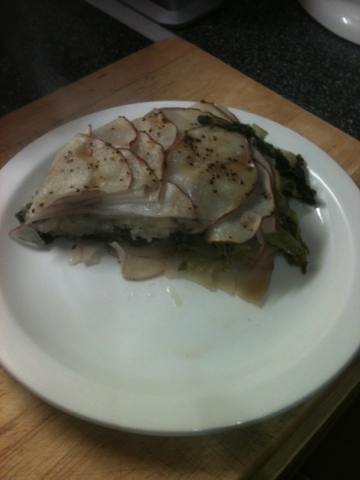