I love Mexican food (as long as its not too hot) and make my burrito bowl often but sometimes wish I had a wrap or tortilla to go with it.

I had a day off today so did some experimenting in the kitchen and came up with these. I know you can make thin omelettes to use as wraps but they arent the same. This version might not be identical to a tortilla but its pretty close and just under 1 syn each. They are a bit like pancakes but there is no milk in them which also helps keep them lower in syns.  I tried a couple of different flours to make these and had a good result with both gram flour and plain flour.

The best results came from leaving the batter to stand for a couple of hours before using it. I used a small non stick frying pan and this recipe made 6 'tortillas' but of course if you want them bigger just use a bigger frying pan and double the amount you put in for each tortilla.

Beat the egg in a small bowl and add the flour and salt and gradually whisk in the water until you have a smooth batter (few tiny lumps wont matter).

Leave the batter to stand for a couple of hours if you can or make the batter the night before you need to use it but cover it and keep it in the fridge .

Heat a small non stick frying pan and spray with the spray oil , Add 1  1/2 tablespoons of the batter and swirl the pan so it coats the base , Fry until  brown on the base then flip it over and cook the other side. This should make six tortillas at just under 1 syn each.

I served them as wraps for my burrito but think they would be good to use as any wrap for a sandwich too. 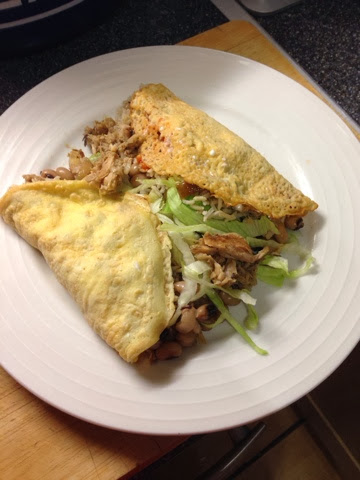