Posted by Vicki-kitchen on August 28, 2014
I made this dish when I had to feed two people and only had one steak : ) I have made hash like this before but used leftovers but this made a tasty meal which is pretty economical too. The seasonings are simple just salt and pepper but you could add some garlic or some smoked paprika would be lovely as well. This recipe serves two but of course it could be increased or bulked up with some vegetables such as mushrooms or peppers to serve more.

Serve with a side salad for your slimming world super free .


Boil the diced potato cubes in salted water until just cooked (about 5-10 minutes) then drain and set aside. Spray a large non stick frying pan with a little oil and over a medium heat gently fry the onion until soft then add the steak and cook until browned . Add the cooked  potatoes and season well with salt and pepper.

In a separate frying pan spray with the oil and fry the eggs and serve each portion topped with the fried egg. 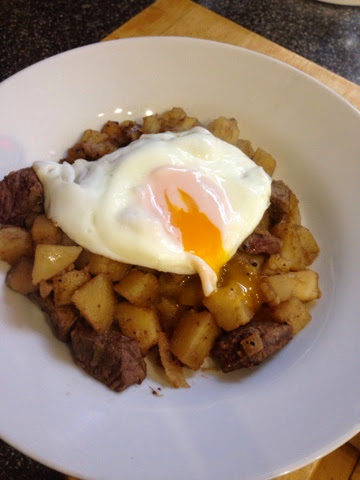