This recipe came about after I had some leftover mushroom risotto and remembered ages ago in an Italian restaurant I had arancini which are little risotto balls with a savoury filling but unfortunately they are also deep fried which is not of course Slimming World friendly.

I had to think how to make them crispy but not use loads of syns, My sister and I weighed up and tried a few different coatings and finally ended up using panko breadcrumbs which can be bought in many big supermarkets now as they are light but as they are quite big flakes I blitzed them in a food processor for a while first.

I was also thinking you could probably make this with packet savoury rice too but some have syns so be careful.I used laughing cow extra light cheese triangles for the cheesy filling but was thinking could probably use the new different flavour mini laughing cow cubes too.

They are a little fiddly but were very tasty .

12.5g panko breadcrumbs (blitzed in a processor for a few minutes )

Mix the beaten egg well into the risotto, Take one tablespoon of risotto in your hand and flatten it out a little.

Place the cheese in the middle and gently squeeze the ball together until its stuck together.

Roll gently in the panko breadcrumbs then place on a baking tray covered in greaseproof paper.

Repeat until you have six rice balls made then place in the fridge for half an hour to allow them to firm up.


Makes 6 and are just under 1 syn each 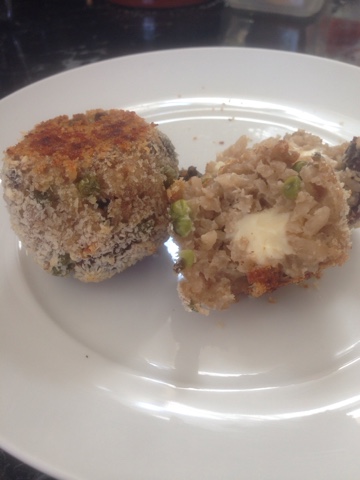