Now it's a new year I have gone back to my obsession with Nigella Lawsons new book 'Simply Nigella' and adapting some of her recipes to make them Slimming World friendly. This dish is named after her son Bruno if you were wondering why it's called Pasta alla Bruno and was so easy to make it's definitely going on my quick after work dinner list. It is made is under 15 minutes total!

I used penne pasta for this but you could use any small shaped pasta really. The original recipe called for the cherry tomatoes to be quartered and although Nigella I love you I really didn't have time for that so they are halved.


Cook the pasta in lots of salted boiling water according to the instructions and while its cooking start the sauce as it all cooks quite quickly.

Spray a large pan with some of the spray oil and fry the strips of bacon until cooked though then add the garlic, chili flakes and the tomatoes stir well and put the lid on for a few minutes stirring lightly now and then.

When the pasta is almost cooked but still firm take the pasta out of the water with a slotted spoon and put into the bacon and tomatoes taking a little of the pasta water each time this is what helps to make the light sauce.

When all the pasta is in the pan with the bacon and tomatoes  stir well, turn off the heat and put the lid on and leave for five minutes.

Season well with pepper and salt if you need it (might not because of the bacon) .

Serves 2  generously and is Syn free on extra easy 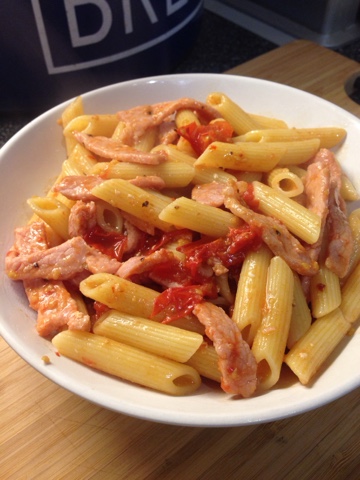