This is one of my favourite family recipes to be honest I thought I had already put this recipe on my blog but when I looked I hadn't so here it is. There is the debate about calling it a shepherd's pie but I've always been told shepherd's pie is made with lamb and cottage pie is made with beef but call it whatever you like :  )

This recipe makes a HUGE pie (see picture) which serves six but feel free to half the recipe or make two smaller ones it freezes well too. It's also a great recipe to make the day before and keep in the fridge ready to put in the oven and cook after work.

I always try and put lots of vegetables in the pie so its almost a one pot dish but still serve with cabbage or broccoli for extra speed.


Spray a large pan or wok with spray oil and add the leeks, carrots, celery and onion and sprinkle with 1/2 tsp salt with the tsp of dried thyme and fry gently over a medium heat for 5-10 minutes until the vegetables are soft but not browned.

Add the minced beef turn up the heat and cook stirring all the time breaking up the mince until all the mince is browned. Sprinkle over the tbsp flour and stir really well then add the boiling water and the two stockpots stir well and bring to a boil, Turn the heat down and simmer until the gravy has reduced and is thickened stirring occasionally. Taste for seasoning you might need to add some salt and pepper.

Place the potatoes in a large pan of water, add 2 tsp salt and bring to the boil, Boil until the potatoes are soft then remove from the heat, Drain well and return to the pan and mash until smooth, Add the egg  and mix very well and add salt and pepper to taste. If it seems too stiff just add a little boiling water.

Place the minced beef mixture in a large casserole dish and top with the mashed potato, Score the surface with a fork then spray lightly with the spray oil. 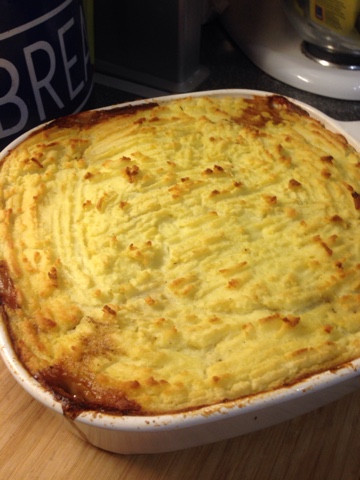