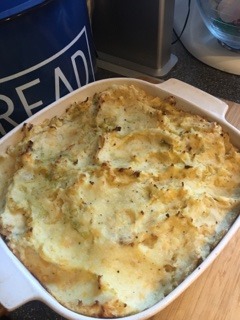 I came across this recipe and thought I HAVE to make that I love the name of it. It's basically a vegetable mix up and is great to make with leftovers but this recipe is if you want to make it from scratch. The original recipe had lots of butter in but I adapted it to make it Slimming World friendly and it's become a favourite in my family. The recipe originated from Scotland but have no idea where the name came from maybe from the bumpy surface? It makes a change from plain mashed potato and it includes loads of vegetables too so it's a winner all around.

Place the potatoes (and swede if you are cooking together) in a large pan of cold water with a couple of teaspoons of salt and bring to the boil. Boil under they are both tender but not falling apart. Drain well and return to the pan and mash together well. If doing the singing swede method just add the soft swede to the mashed potatoes and mix well.

In a large frying pan or wok spray with the spray oil and over a medium heat cook the cabbage (no need for water) and fry until the cabbage is softened and wilted.

Mix the cabbage into the potato and swede mix and season well with a tsp of salt and pepper more if you think it needs it.

Spoon into a large casserole dish and spray with the spray oil and then brown in the oven until the top is browned.