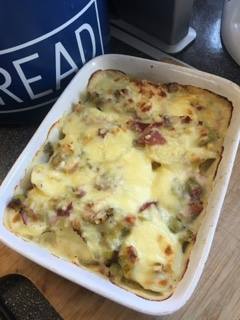 I made this when I had some leeks and potatoes to use up I was going to make soup then saw I had some bacon medallions and so made up this dish. It's great to serve on it's own with extra vegetables for speed or you could leave out the bacon so it would be suitable for vegetarians or serve it as a side dish to  simply grilled piece of fish or meat.


Spray a large frying pan with the spray oil and add the leeks, Fry gently on a low heat until the leeks start to soften, Add the bacon  and cook for another 5-10 minutes until the bacon is cooked then set aside.

Place the potato slices in a large saucepan of salted water and boil for 5 minutes then drain.

Put the milk in a saucepan and whisk in the cornflour and bring to the boil whisking all the time until thickened, Cook for a few more minutes then remove from the heat and stir in half the cheese (80g) stir well until the cheese has melted. Season to taste with salt and pepper.

Spray a casserole dish with the spray oil and place a layer of the leek and bacon mixture on the base of the dish, Cover with a layer of the potatoes and repeat.

Pour over the cheese sauce and sprinkle on the rest of the grated cheese.

Serves 4 generously 2 syns per portion if you use the cheese as your healthy extra.