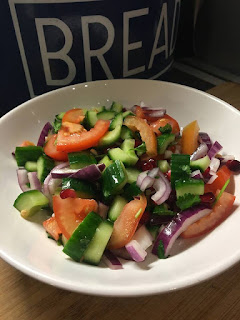 It's hard in the Winter sometimes when it's cold and dark to feel like having salad but this salad is so fresh and delicious when I make it I can't leave it alone. I first had it in Romy's Kitchen which the fanatastic chef Romy Gills restaurant in Thornbury near Bristol. It is a perfect accompaniment with a curry really bright, zingy flavours and is very easy to make. I buy the pomegranate seeds already prepared as it makes life easier and these are available in most large supermarkets.


Cut the cucumber in half then in half again then remove the seeds with a teaspoon and slice , Cut the tomatoes in half and remove the cores and roughly chop, Slice the red onion thinly and cut each slice in half again or chop if you prefer.

Place everything you have prepared in a large bowl and mix in the pomegranate seeds and coriander. Pour over about a tablespoon of lime juice and a teaspoon of salt and mix well but gently.

Taste for seasoning you might need a little more salt or lime juice. I tend to make this about an hour before it's needed to let the flavours develop.

Syn free serves about four as a side dish