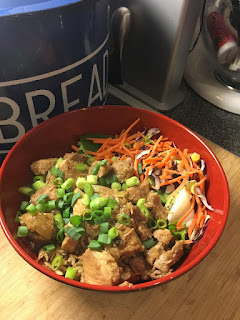 I had only recently heard about this dish from watching "Katie-A Home Cook" on YouTube you might remember her from the TV series "Britain's best home cook" on her YouTube channel she cooked with another of the contestants from the show Josie who made this traditional Filipino dish which is sort of a casserole or stew. It has very simple ingredients and is easy to make. The original recipe is made with pork belly which I swapped for lean diced pork to make it Slimming World friendly and cooked it for longer because of this. You can also use chicken if you prefer

The idea of putting whole peppercorns in made me think I'd have to pick them out at the end but they sort of melt into the dish and using whole peppercorns doesn't make it hot or spicy just more fragrant. I read a few other recipes too and decided to use cider vinegar instead of ordinary vinegar. The fish sauce is a more unusual ingredient but I've seen it in all the major supermarkets and it's not expensive and doesn't make the dish taste fishy just rich in flavour.

Give it a try xx


Place the pork in a large bowl and mix in the two tablespoons of fish sauce plus teaspoon of ground pepper and set aside.

Spray a large pan with the spray oil and over a low heat soften the onions and garlic for about 5-10 minutes if it starts to stick just splash in a little water then remove from the pan and set aside.

Spray the pan again with some of the spray oil and add the pork and turn the heat up and cook the pork until brown this does take a little time cook till the liquid has evaporated  and the pork is brown.

Add the water, vinegar, soy sauce, peppercorns, bay leaves and the cooked onions and garlic. Stir well bring to a boil then reduce the heat to a simmer put on a lid and simmer for 30 minutes.

Remove the lid and add the oyster sauce, stir well and simmer until the sauce has almost gone.  (Remove the bay leaves before serving).

Serve sprinkled with the spring onions with salad and rice.

Serves 6 and is syn free