I was lucky enough to be invited to the opening of a new Cardiff restaurant the other week, The restaurant is called 'Tortilla' and I have to say it was amazing.

I know Slimming World does not endorse any restaurants but I was lucky enough to have a long chat with the chef Bruno Piers and from what he told me a lot of the ingredients they use would be very 'Slimming World friendly'.

Although they do the usual burritos and tacos which we all know are high in syns they also do this other dish called a 'Naked Burrito' and this is a lot of the yummy fillings that go into burritos but are served in a bowl so you don't get the high syn tortilla wrap. You have a choice you can eat in or have a takeaway and the friendly staff really help to give the place a great atmosphere.

When I spoke to Bruno he explained they use only fresh ingredients and in fact don't even have freezers on the premises. He was very open and honest and said they use a very little oil to stick the spices onto the grilled chicken option and a very little oil in the rice before they cook it.

To assemble your Naked Burrito you stand in front of a counter and choose your fillings so it's very easy to make sure you have lots of the speed foods like the salad and free foods like the beans to fill you up.

Mine was started with rice, then some grilled chicken then lots of lettuce and fresh salsa and a mixture of fresh coriander and onion. I also had a few lime wedges to squeeze on top and have to say it was absolutely delicious. Tasted really fresh but was also filling due to the beans and rice it was spicy but not too hot. They serve hot sauces if you like things spicier!!

To be on the safe side I counted the dish as 6 syns for a tbsp of oil but don't think it was anywhere near that much there was no oily or greasy taste to the food.

I was so thrilled to think there was somewhere I could go for food when on a shopping day out with my family or with the girls and no one had to think I was having 'diet' food or we coudn't eat somewhere as there was nothing I could have which has happened countless times in most chain restaurants.

Tortilla has many branches throughout the UK and I will definitely be back again. Have a look at the website to see what they make everything looks so good :) 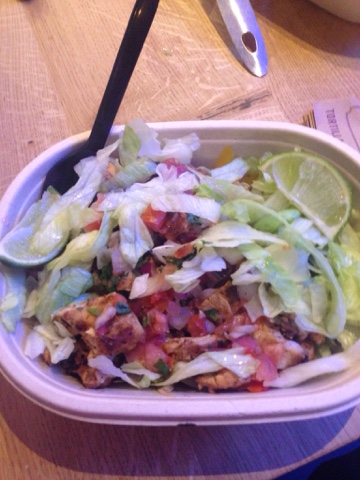