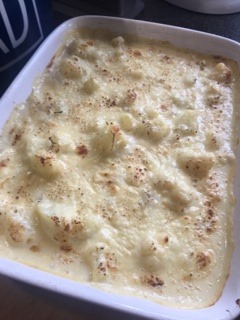 Although not syn free it's pretty low in syns and really does taste like a traditional cauliflower cheese but it does use your healthy extra cheese per portion, I usually serve this as a side dish on a roast dinner or with other vegetables, potatoes and low fat sausages.

I don't have a working grill at the moment so ended up browning the top with my cooks blowtorch!!


Cook the cauliflower in boiling salted water until tender then drain and place in a shallow casserole dish.

In a medium size saucepan place the milk, dijon mustard, cornflour, tsp salt and 1/2 tsp pepper and whisk well. Bring to a boil whisking all the time and then cook for a few minutes as the sauce thickens reduce the heat to a simmer.

Add 100g of the cheese and keep whisking until the cheese has melted then remove from the heat, whisk in the egg yolk and whisk for another minute or two.

Pour the sauce over the cauliflower and sprinkle with the other 60g of grated cheese and finally brown under the grill.

Serves 4 at 2 syns per portion.