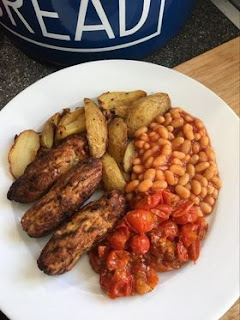 I was inspired to make these after watching Tom Kerridge make some on TV,  He used fennel and chili but I thought I'd keep it simple with just sage and onion and they were a big hit with my family. They are a little bit fiddly but nothing too much hassle. The trick he used was to poach the sausages wrapped  in clingfilm in water before frying them to brown them and this helps them not to dry out. Don't worry the clingfilm doesn't melt!

I used turkey mince but you could use lean minced beef or pork if you'd rather but turkey goes well with the sage and onion.  I'll probably try different herbs and spices when I make them again. Tom used a food processer to blend the mixture but I think you could do it with your hands too if you don't have one.

Spray a small frying pan with spray oil and add the onions and sage then over a lowish heat fry the onions until soft, Set aside to cool.

Place the turkey mince in a food processer and add 2 tsp salt and 1 tsp pepper and the cooled onion mixture,  Blitz a couple of times to blend everything together.

Divide into roughly equal portions and then lay out a sheet of clingfilm and place one portion in the middle of the clingfilm and fold over then gently roll into a sausage shape and twist the ends so it's sealed and repeat until all done.

Bring a pan of water to the boil then turn the heat down till the water is just simmering, Add the sausages and poach for ten minutes. 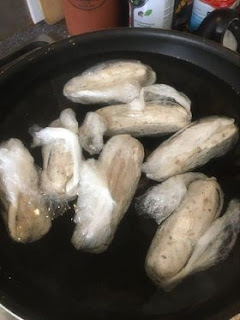 Unwrap the sausages and then spray a frying pan with spray oil and fry gently until browned.
Makes around 6-8 and are syn free