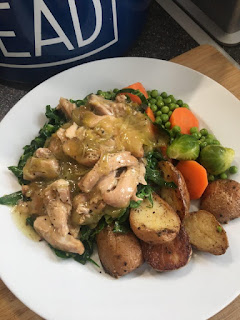 Not the prettiest dish I have ever made but it was very tasty and easy to make.  I love slow cooker dishes just put everything in the slow cooker in the morning and when you get in from work just a little tweak and dinners ready.

This is a great one to make on a Monday or Tuesday and serve with any leftover vegetables from your Sunday roast but you could serve it over rice too.

Put the chicken, leeks, sage and stock in the slow cooker cover and cook on low for 6-8 hours.

Once finished remove the lid and turn up to high, Put the cornflour in a small dish with some cold water and mix well then add to the casserole. Let it bubble for a few minutes stirring occasionally until thickened then add 1/2 tsp pepper and taste to see if needs salt (the stock might mean it's seasoned enough).